Is the food supply strong enough to weather COVID-19? 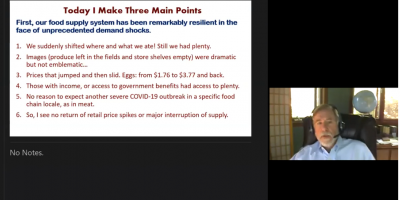 Abstract: This article reports the first publicly available egg production costs compared across 3 hen-housing systems. We collected detailed data from 2 flock cycles from a commercial egg farm operating a conventional barn, an aviary, and an enriched colony system at the same location. The farm employed the same operational and accounting procedures for each housing system.

Total capital investments per hen-capacity are much higher for the aviary and the enriched house. Capital costs per dozen eggs depend on assumptions about appropriate interest and depreciation rates. Using the same 10% rate for each housing system shows capital costs per dozen for the aviary and the enriched housing system are much higher than capital costs per dozen for the conventional house. The aviary has average operating costs (feed, labor, pullet, energy, and miscellaneous costs that recur for each flock and vary with egg production) about 23% higher and average total costs about 36% higher compared with the conventional house.

Is the food supply strong enough to weather COVID-19?